ExaGrid’s award-winning scale-out architecture provides customers with a consistent backup window regardless of data growth. Its unique Landing Zone retains the most recent backup in its full undeduplicated form, enabling the fastest restores, offsite tape copies, and instant recoveries.
ExaGrid’s multiple appliance models can be combined into a single system configuration, allowing full backups of up to 2PB with a combined ingest rate of 432TB/hr. The appliances virtualize into one another when plugged into a switch so that multiple appliance models can be mixed and matched into a single configuration. Each appliance includes the appropriate amount of processor, memory, disk, and bandwidth for the data size, so as each appliance is virtualized into the system, performance is maintained and backup times do not increase as data is added. Once virtualized, they appear as a single pool of long-term capacity. Capacity load balancing of all data across servers is automatic, and multiple systems can be combined for additional capacity. Even though data is load balanced, deduplication occurs across the systems so that data migration does not cause a loss of effectiveness in deduplication.
This combination of capabilities in a turnkey appliance makes the ExaGrid system easy to install, manage, and scale. ExaGrid’s architecture provides lifetime value and investment protection that no other architecture can match.

When using ExaGrid, backups are written directly to the Landing Zone, so that the most recent backups are protected and immediately available in its full undeduplicated form for fast restores, VM Instant Recoveries, and tape copies while the offsite data is ready for disaster recovery. Backups to traditional deduplication appliances and straight disk are stored in a deduplicated form which requires lengthy rehydration when data needs to be restored. 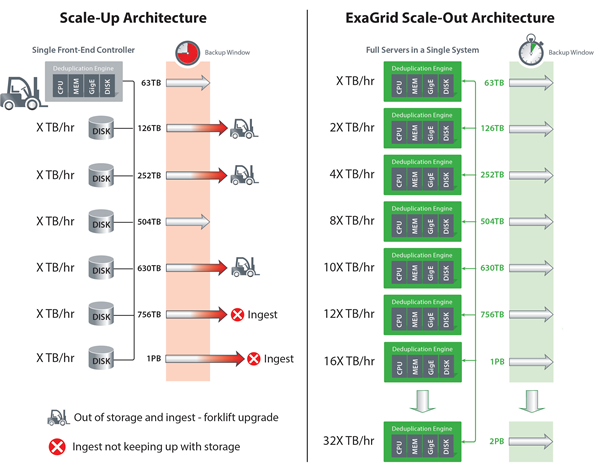 Since data deduplication uses a lot of processor and memory resources, as data grows, the amount of data deduplication to be performed grows as well. The first generation of deduplication storage appliances utilize a “scale-up” storage approach with a fixed resource front-end controller and disk shelves. As data grows, they only add storage capacity. Because the compute, processor, and memory are all fixed, as data continues to grow, so does the time it takes to deduplicate the data. The backup window becomes so long that the frontend controller has to be upgraded (called a “forklift” upgrade) to a larger/faster controller, which is disruptive and costly. Similarly, deduplication that is built into the backup software is far less aggressive, uses a larger amount of disk, and is much slower for backups and restores.